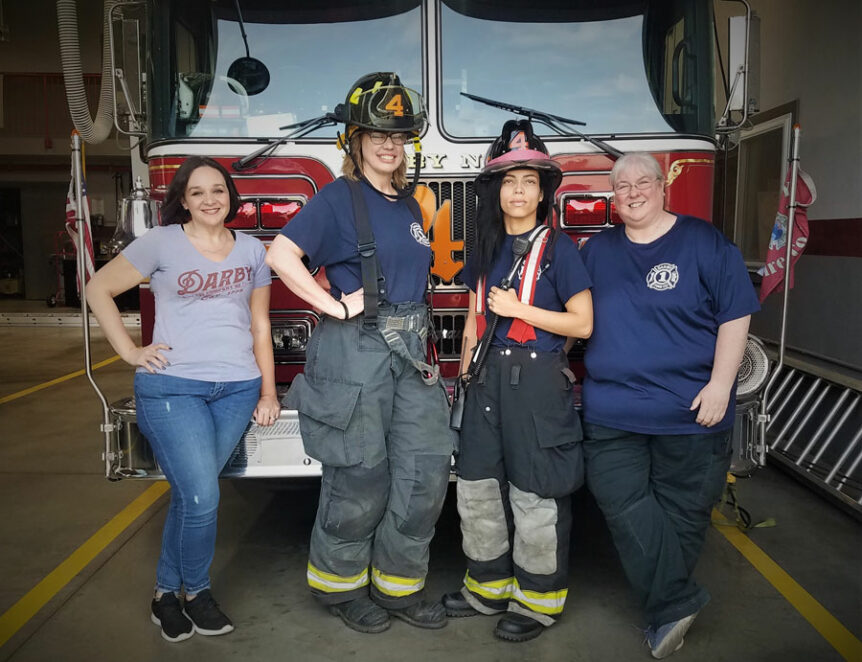 To understand the significance of the four women who volunteer with Darby Fire Company – and the thousands of women who gear up for fire calls nationwide – one must first look back.

In 1818, a fire call came in to the Oceanus Engine Co. 11 in lower Manhattan, but there was hardly anyone available to answer it. A blizzard was ravaging the city, along with an influenza outbreak that had sidelined many of the firefighters.

Into the snow came Molly Williams, hauling out a water tanker in her calico dress and apron. She was a black enslaved woman, and she was the first female firefighter recorded in American history.

Williams, who was also a cook for the company, was said to have been “as good a fire laddie as many of the boys.” But despite Williams’ determination and skill, it took many more decades before women became regular members of fire departments, and even today, they comprise only 4 percent of active firefighters.

Around the same time as Williams’ service in New York, Delaware County’s Darby Fire Company was already up and running. Back then, firefighters used buckets, ladders, and hooks to fight fires; it would be another 15 years before they purchased their first fire engine.

They’re the second oldest volunteer company in Pennsylvania – the fifth-oldest nationwide – and the four women who serve with them bring to the group their own stories, skills and experiences.

“Darby is unique because of when they were established,” says Darby volunteer Aubrey Lehman. “The long rich history of those that came before me is absolutely wonderful and cannot be replicated.”

Lehman and JoAnna Billings are firefighters, while Joanne Middaugh serves as the company’s vice president and Mary Ann Bradford is an administrative volunteer.

They all were drawn to Darby 1 for its well-established reputation of quick and aggressive response to emergencies, as well as the culture and people within the company.

“The drive to be on scene first and get that fire out fast is something I strive to be part of,” Billings says. Her passion for helping others began with a pair of house fires when she was a young child; the experiences stuck with her. “To be able to not only help stop damage, but be there for and save someone in danger … for me, that’s what it’s all about.”

Billings was introduced to Darby by Lehman; the two are both in an online group of female firefighters. Middaugh, meanwhile, got involved in firefighting at 16 and joined the company alongside her then boyfriend, now husband. She’s been with Darby since 2005.

“I fell in love with the people down here,” she says. “This is where I’m meant to be.”

While firefighters play crucial roles within the company, there are other ways to help out around Darby. Bradford assists in ways outside of fire calls; in particular, she’s a photographer at training drills and special events, giving faces to the names that serve the borough.

“I love it when I can capture the firefighters in action,” she says. “And I know they appreciate me doing it.”

Darby provides volunteers training and equipment at no cost to them, which means that any newcomer will eventually be just as skilled as their peers, even without prior experience in the fire service.

But there may be some beneficial characteristics that women, specifically, bring into firefighting. They’re smaller, in general, which means they can get into tighter spaces, says Lehman. Middaugh notes that their voice and presence at fire calls can be calming, especially for scared children.

“I genuinely feel women have this drive to be accurate,” says Billings. “And because we have to prove ourselves, not only as firefighters, that means we end up working harder to show we know what we are doing. Therefore we don’t tend to just rush in, there is always a plan behind our attack.”

That said: “I will do all I can to show them when that turnout gear is donned, you’ll never know who is under that mask, man or woman,” she adds.

Darby’s recruitment slogan is “expect the unexpected, then conquer it.” And while a woman in fire gear may not be as unexpected now as it might have been during Molly Williams’ great feat 200 years ago, these volunteers continue to conquer conventional notions about the fire service.

Being a woman among the brotherhood of Darby Fire Company is “empowering and a wonderful thing,” says Lehman. “I don’t back away from a challenge.”

You can join these women and the other dedicated members at Darby Fire Company by signing up to volunteer at www.JoinDarby1.org.