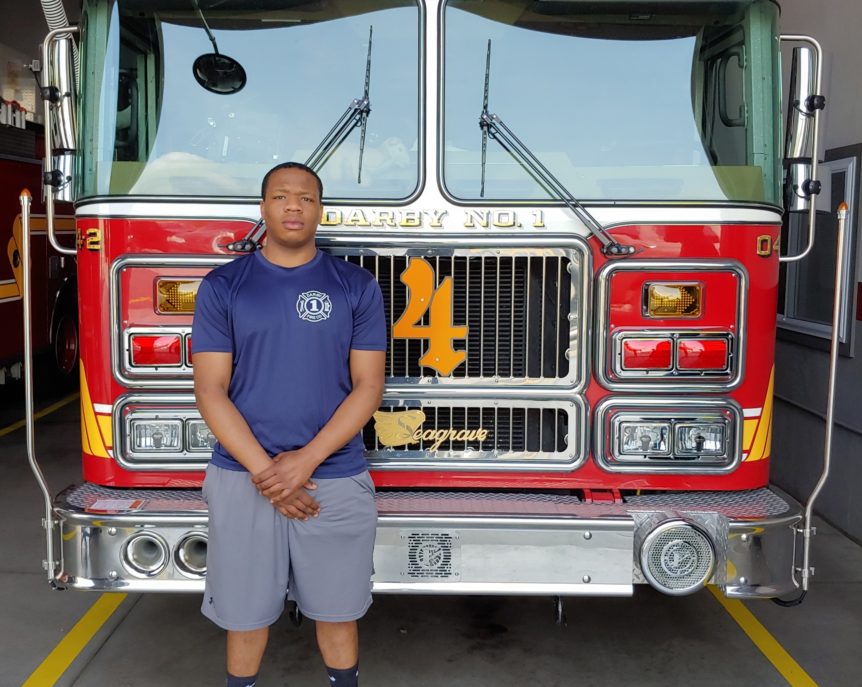 Terrel Lee will be the first to admit that when he was growing up, he didn’t always make the smartest decisions in life. Following years of regularly getting in trouble at school and then finding himself lost after a football career ended, he was searching for guidance.

That’s when the 22-year-old decided to start by giving back to his community as a member of Darby Fire Company #1 and life changed for the better.

Now almost a year as a volunteer member at the station, he’s beginning to move forward toward a stable career and new opportunities and wants to share his story of how helping others as a volunteer firefighter can be the perfect way to find a second chance in life

“I was a troublemaker when I was younger,” said Lee. “Dumb stuff like getting in fights at school, getting suspended, talking back to teachers. I got in a lot of trouble and I almost got locked up in jail.”

Lee, a Sharon Hill resident, graduated from Academy Park High School in 2016. After high school he was sure any success in life for him would come thanks to his performance as a middle linebacker on the Cheyney University men’s football team. Unfortunately, the school decided to pull the plug on the program. So Lee transferred to West Chester University but only made it a semester before dropping out.

With football out of the equation, he had a choice. Follow his friends from high school back to a life of trouble, or chart a new course. Last August, John Ellis, a member of Darby Fire Company, mentioned volunteering at the station to him as an option. Lee, who lives up the street from the station, was curious and decided to walk down to fill out an application. The membership committee shook his hand and were very friendly. After a brief interview, they told him he would find out in a few days whether he’d been accepted as a member.

A few days later Lee remembered sitting in his house when suddenly loud sirens came roaring up the street racing to a nearby fire.

“I walked out of the house and up the street to the fire. I see John (Ellis) get off the truck and grab a saw and went to the roof of the burning building to ventilate it. I knew then this is what I wanted to do.”

After the fire, another Darby member, Michael Brodezinski, came out of the building and walked over to Lee. They had known each other growing up. Brodezinski asked Lee if he’d checked his email yet. The membership committee had emailed him to let him know he’d been accepted.

Lee started volunteering with Darby Fire Company last September and described the environment as fast paced. After a tour of the station, he was soon learning about the various pieces of equipment and going over the station’s standard operating procedures. The following Tuesday was his first training night, where he began learning how to wrap a hose and position a ladder. He also learned he wouldn’t be allowed to enter a burning building until he’d completed fire school and was certified.

In March, Lee began attending fire school at Delaware County Emergency Service Training Center with two other Darby members, Meghan Crawley and Raheem Hill. Within a month Lee’s teachers told him he and Crawley were at the top of the class. Lee said he’s never felt overwhelmed. “They walk you through it,” he said. “You don’t get overwhelmed at all. They let you work at your own pace until you’re done fire school. Then you pick up the pace. It’s a nice, friendly environment. There are a lot of people my age, so it’s competitive but we’re not putting anyone in danger.”

Lee is scheduled to finish fire school in June and plans to go back for a second certification. Then he’s planning to enroll in the police academy this July.

Darby Fire Company has helped him get back on his feet and he’s been able to make connections through the other volunteers at the fire company. “I like how they accepted me so quickly,” he said. “There’s a brotherhood and a community at the firehouse.”

As he begins turning his life around, Lee, no longer a troublemaker, has made it his mission to extend a hand to others. He’s already reached out to friends from high school and others who may benefit from becoming volunteers themselves with the hope that they’ll follow his example. He also wants to give back to the station by finding new members to bolster the ranks. “I know they would welcome more volunteers,” he said.

From once feeling lost and trying to find a way forward in life, now Lee thanks the Darby Fire Company for giving him a direction. “I should have been doing this sooner,” he said.
Becoming a volunteer at Darby Fire Company #1 can lead to many opportunities for personal and professional growth. Learn how you can find a role to match your talents: from firefighters and training members, to fire police and administrative volunteers, everyone can help. No experience is required and the training and equipment come at no cost to you. Visit JoinDarby1.org to learn more. Expect the unexpected, then conquer it.