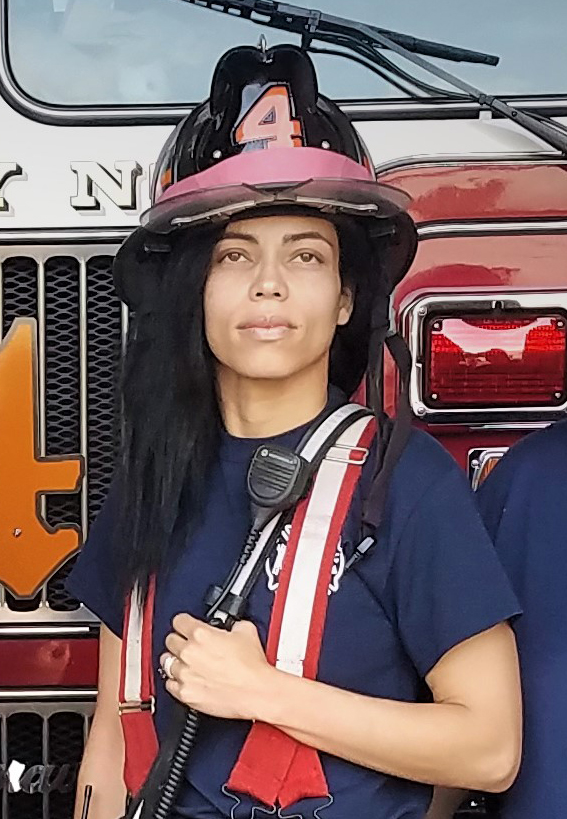 Aubrey Lehman filters out voices of doubt, turning ‘No,’ ‘I can’t,’ or ‘Not allowed,” into nothing more than white noise.

Lehman is the only interior qualified deaf female firefighter in the Mid-Atlantic region and is inspired by those that previously stated she wasn’t fit to be a firefighter. She has volunteered with Darby Fire Company #1 of Delaware County since 2019 where she is currently the only active female firefighter.

Lehman has been in fire service for 16 years. Like many young men and woman across the United States in the early/mid 2000s, Lehman was inspired by the heroism of the FDNY on Sept. 11, 2001.

Lehman had some struggles such as the fear of losing her cochlear implant, which turned into second thoughts on being a firefighter. But she soon realized that quitting wasn’t who she was and that she could overcome temporary problems.

“I gave up once. I regret doing that because it’s not who I am. Don’t ever give up just because of what people say,” she explained.

Lehman, who is also an EMT, found a few ways to use being deaf to her advantage. Like many deaf people, her sense of awareness is higher than most, and she notes she can pick up on things that others may miss due to noise.

“It took many years of trial and error to get that confidence and skill set,” she explained. I was able to filter out those that say ‘I can’t,’ and rise above for others, hoping they can be inspired to keep going regardless of what is said.”

Lehman uses a neoprene swim wrap to help keep her external implant in place. She and the Darby firehouse actually refer to it as a “Smokey” wrap, named after the late Joseph “Smokey” Stalford, a beloved firefighter who gave Lehman the idea so she wouldn’t feel left out.

Through the mentorship of some legacy firefighters such as Stalford, Lehman was able to find confidence, learn to remain calm and overcome fear. Some of the Darby firefighters even learned to use her hand signal system just in case her implant slips off or if she’s not wearing it.

“I owe my thanks to some of these firefighters and officers for helping me and not seeing me any different,” she said. Their love for Darby and the fire service is unwavering.”

Lehman wants to pay that love and support forward by helping present and future volunteer firefighters. She is striving to recruit others to join Darby Fire Company #1, and mentor those who may be a little hesitant or unsure that they are a fit for firefighting.

“If you make it, you make it; if you don’t, you don’t,” she said. “But the key thing is you tried. Nobody can take that from you.”

Darby Fire Company #1, which consists of over 40 volunteer firefighters, is known for its motto of “most aggressive” since 1775 and its recruitment slogan of “expected the unexpected, then conquer it.”

Lehman is proud to be with Darby Fire Company #1 and believes in high standards that the company and each firefighter hold themselves to. She believes in keeping these pillars strong and passing them on to those who come after her.

“The most fulfilling aspect is making sure the legacy of those that came before me remains and gets passed on to the next generation of firefighters,” she said.

Fire Police assist at the scene of an emergency by helping to direct traffic, crowds, and working with other first responders. Teenagers ages 15 to 17 can become training members by helping at the station, assisting firefighters at the scene of an emergency, and training to become a full member once they turn 18. Becoming a training member looks great on college applications. For those looking for other ways to help besides fighting fires, there are plenty of administrative volunteer opportunities available. Administrative volunteers work behind the scenes doing important business for the company to keep us up and running.For more information on Darby Fire Company #1 or to fill out a no-obligation inquiry form, visit at www.joindarby1.org.